In the late 1990s, Larry Carin and Leslie Collins — both just beginning their tenures in Duke’s Department of Electrical and Computer Engineering — began teaching computers how to spot buried landmines. The two worked together with a team of researchers for several years developing “active learning” algorithms to optimize their mine-hunting software.

It didn’t take long for those early image-processing strategies to move from their military roots to the medical realm.

Researchers at the University of Pennsylvania soon added Carin’s active-learning algorithms to software they were developing to help doctors classify cancerous cells. While the software already worked reasonably well, the new algorithms made it more accurate and more consistent. The enhanced toolkit also reduced the time physicians had to spend labeling cell samples to train the system, because the algo­rithm automatically selected the best examples.

It was just one of many early successes that hinted at the revolution to come.

“The power of deep-learning image analy­sis has become increasingly clear over the last several years, and image analysis is very import­ant to many aspects of health care,” said Carin, now the James L. Meriam Professor of Electrical and Computer Engineering and vice president for research at Duke. “With examples in radiol­ogy, pathology, dermatology, cardiology and more, the analysis of health-sensing data with machine learning will be transformative in the coming years.”

Carin should know. He is now leading one research project to autonomously spot cancer­ous cells in digitized slides of thyroid biopsies and another to detect early signs of Alzheimer’s disease through retinal scans.

Over the past several years, Duke has hired a string of machine learning experts and launched several ambitious projects to tie Duke Health and Duke Engineering closer together. With a growing array of computer engineering faculty partnering with colleagues in the nearby medi­cal school, and a new campus-wide initiative focused on AI solutions for health care, Duke ECE is playing a major role in the university’s commitment to leverage machine learning to impact human health.

While Leslie Collins continued her work on detecting landmines well into the 2010s, she has also led several projects that applied machine learning concepts directly to health care. The earliest example—which continues to this day— is using machine learning to improve cochlear implants.

Cochlear implants are prosthetic devices that deliver direct electrical stimulation to auditory nerve fibers, at least partially restoring normal hearing in deaf individuals. Hundreds of thou­sands of adults and children worldwide have received cochlear implants, and the great major­ity can talk on phones and follow conversations in relatively quiet environments.

Using machine learning, Collins’s laboratory is exploring how the spacing between electrodes and the timing of their interactions affects the user’s experience. The new signal coding techniques should provide either more natural neural responses, or a more complete represen­tation of the acoustic signal, which may improve speech recognition for individuals with cochlear implants.

In another project involving acoustic signals, Collins and colleagues in the School of Medi­cine are using digital stethoscopes and machine learning to listen for complications with left ventricular assist devices (LVADs), which are mechanical heart pumps that prolong the life of patients with advanced heart failures.

Collins is also using machine learning to decode P300 brain waves to allow patients who are neurologically “locked in” to commu­nicate through a brain-computer interface using electroencephalography (EEG) data. While initial proofs-of-concept have already been successful, the laboratory is working to make the system faster and more robust before seeking a commercialized version of the tech­nology. Her laboratory is also using EEG data in an attempt to autonomously monitor the brain function of patients who have sustained brain injuries to guide early management and provide a foundation for a more accurate prognosis and trajectory of recovery.

In another project focusing on waveforms, Vahid Tarokh, the Rhodes Family Professor of Electrical and Computer Engineering at Duke, is working to automatically diagnose peripheral artery disease. A narrowing of the peripheral arteries serving the legs, stomach, arms and head, the disease causes muscle pains and cramping that can become debilitating.

Currently, the disease is diagnosed using audio ultrasound and a trained ear. Collabo­rating with Wilkins Aquino, the Anderson-Rupp Professor of Mechanical Engineering and Materi­als Science, and Leila Mureebe, associate profes­sor of surgery at Duke, Tarokh is working to replace the trained ear with a trained computer. If successful, the machine learning techniques will not only construct a classification system based on features of the ultrasound signal, they will be able to reconstruct the audio waveform to predict the shape of the blood vessel.

Tarokh is also working with Sina Farsiu, the Paul Ruffin Scarborough Associate Professor of Engineering, to improve treatment of diabetic macular edema—a leading cause of blindness in working-age Americans.

The first treatment most patients receive for this disease is called anti-VEGF. Besides being expensive and requiring regular injections into the eye, the drug doesn’t work for everyone. If the patient doesn’t respond after months of invasive, inconvenient treatments, the doctor will try a different approach. And it will continue like that until a treatment succeeds or the patient goes blind.

The researchers have, however, developed an artificial intelligence system that can predict which patients will respond to anti-VEGF treat­ment. If successful in retrospective studies and large-scale clinical studies, the system could greatly reduce the cost and save many eyes from going blind. 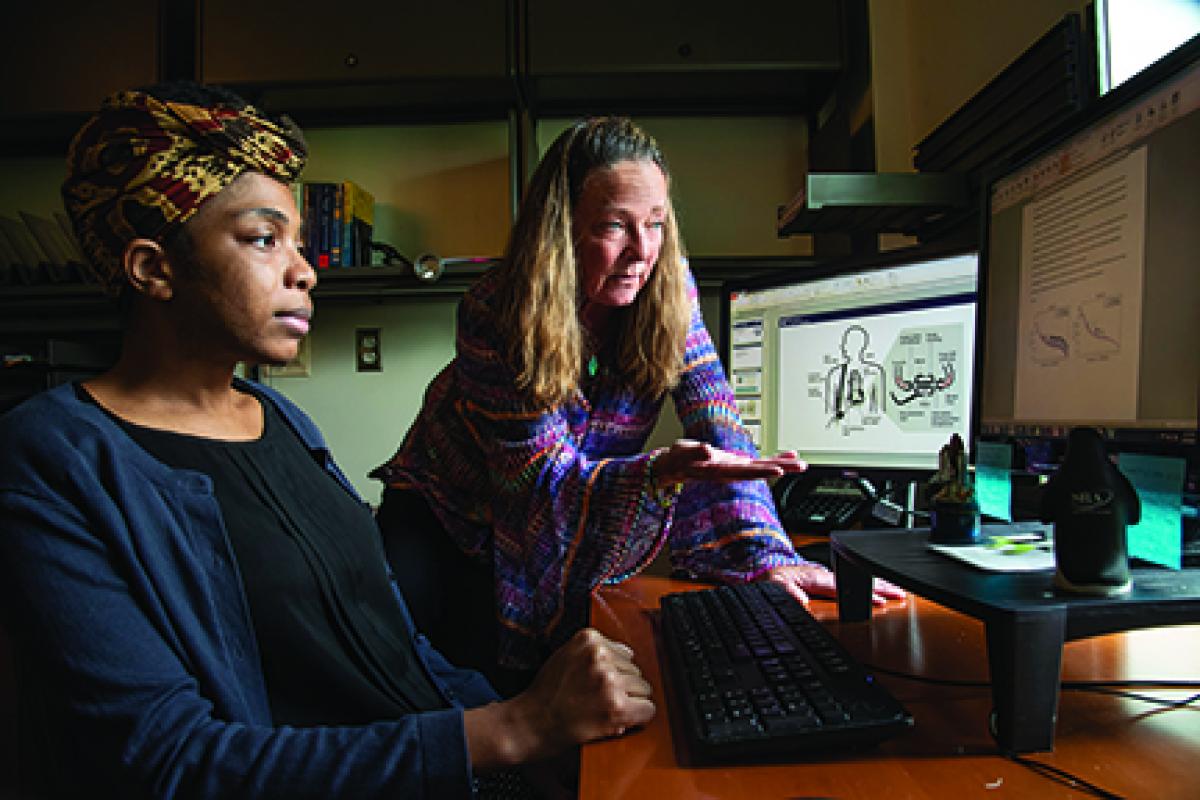 Another machine-learning expert who entered the field through image processing—including developing image compression techniques used in the Mars Rover missions—Guillermo Sapiro, the James B. Duke Professor of Electrical and Computer Engineering, is also turning attention to problems in health care.

With collaborators in the School of Medi­cine, including Geraldine Dawson, director of the Duke Center for Autism and Brain Devel­opment, Sapiro is developing an app to screen for autism spectrum disorder (ASD). Now in clinical studies, the app uses a smartphone’s or tablet’s ‘selfie’ camera to record young children’s reactions while they watch movies designed to elicit autism risk behaviors, such as patterns of emotion and attention, on the device’s screen.

The videos are sent to the study’s servers, where automatic behavioral coding software tracks the movement of video landmarks on the child’s face to quantify emotions and attention. For example, in response to a short movie of bubbles floating across the screen, the algo­rithm looks for movements of facial muscles that indicate interest and joy.

Sapiro is building machine-learning algo­rithms that connect these fleeting facial and eye movements to potential signs of ASD. His group is also using cloud computing tools to develop new machine learning algorithms for privacy filters for the images and videos they collect.

“We’re trying to tackle the challenge of extracting the information we need from a person’s face while simultaneously implement­ing filters to block information users might not want to share,” said Sapiro. “We’re also work­ing to make our algorithms become better over time with each user and make them scalable and more user-friendly.”

With the app showing promising early results, Sapiro is now beginning a project with Nancy Zucker, director of the Duke Center for Eating Disorders, to help children with severe eating disorders. Many children too young to worry about obesity or understand anorexia simply won’t eat, or won’t eat a varied enough diet to receive all the nutrients they require.

Sapiro and Zucker plan to create a machine learning program to help characterize the disease as well as compile information from thousands of families facing these challenges to help find solutions. For example, the algorithm could help find foods similar in texture and taste to things the children will eat that will best help round out their diet.

Another new project just starting to take shape has Sapiro working with colleagues across Duke, including Dennis Turner, professor of neurosurgery; Warren Grill, the Edmund T. Pratt, Jr. School Professor of Biomedical Engineering; John Pearson, assistant professor of biostatis­tics and bioinformatics; and Kyle Mitchell, assis­tant professor of neurology, to create a system for measuring behaviors and movements for people using deep brain stimulation implants to control neuromuscular diseases such as Parkin­son’s. The goal is to provide clinicians a clearer view into how well the technology is working for each patient so that they might fine-tune the device’s parameters.

“It’s like when the noise your car has been making for a week suddenly stops when you get it to the mechanic,” said Sapiro. “Doctors are currently only seeing a snapshot of their patients’ symptoms while they’re in the clinic. We want to create a system that provides the doctors with a much more complete view of how the therapy is working on a day-to-day basis.” 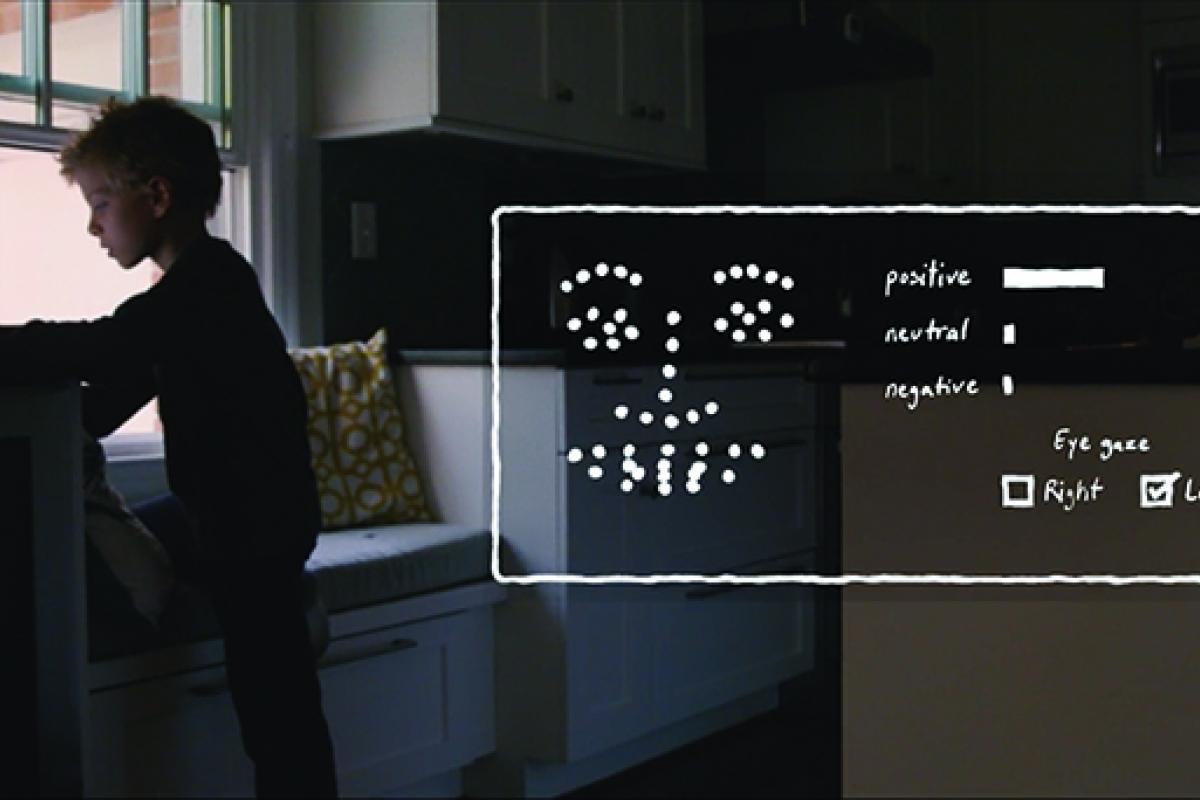 While devices such as OCT scanners, ultrasound machines and smartphone cameras are creat­ing massive amounts of data for computers to learn from, so is the growing use of electric medical records. The difference is that rather than already being bunched together in a nice, tight package, these data are spread out across multiple systems and multiple doctors.

“The most complex patients are being seen by several doctors with several specialties, and these at-risk patients are the so-called ‘elephants in the room,’” said Carin. “Any one doctor generally only gets to touch a small piece of the elephant and doesn’t see that there’s an elephant in the room. Machine learning systems don’t have that limitation. They can see the entire clinical record from all of the doctors and glean insights that that individual doctors can’t.”

Along with Ricardo Henao, assistant professor of biostatistics and bioinformatics and electrical and computer engineering, Carin is building a system to help spot these elephants.

One of the most expensive and dangerous trips to the hospital a person can take is an unplanned one. By using machine learning to analyze the electronic health records and claims data from the Duke Connected Care program, Carin and Henao are predicting which patients are most at risk for complications that could require emergency care in the next six months. Once flagged, care managers can look over their medical records and find appropriate interven­tions—thereby lowering health care costs while improving patient outcomes.

“It’s really about engaging with individuals to help them avoid health complications in the first place,” said Henao. “But to do that, you first need a machine learning model that says from these 50,000 people, these are the 200 that you really need to pay attention to.”

AI & Health: The Future at Duke

The kinds of grassroots collaborations that have sprung up across Duke over the years are now being actively cultivated, with plans underway to turbo-charge efforts to develop AI-driven solutions to challenges in health care. A new initiative co-led by Carin and Robert Califf, Duke

Health’s vice chancellor for health data science, will connect the Schools of Engineering and Medicine and Trinity College of Arts & Sciences with units such as the Duke Global Health Insti­tute and the Duke-Margolis Center for Health Policy to leverage machine learning to improve both individual and population health through education, research and patient-care projects.

Learning Health Units centered around specialties such as heart, cancer and pediatrics will embed data scientists in the clinical setting, where they will work with clinicians to record, analyze and learn from their troves of medical data to predict and prevent complications and streamline care delivery.

“People have said that artificial intelligence will constitute the fourth industrial revolution and that data is like the electricity of the indus­trial revolution,” said Carin. “We think of this project as the electric company. We don’t own data science. We don’t own health data science. But we are going to facilitate it and foster it. We’re going to make it easier for people to simply ‘flip the switch’ and plug into the data science flowing through Duke, no matter what appliance or application they’re using.” 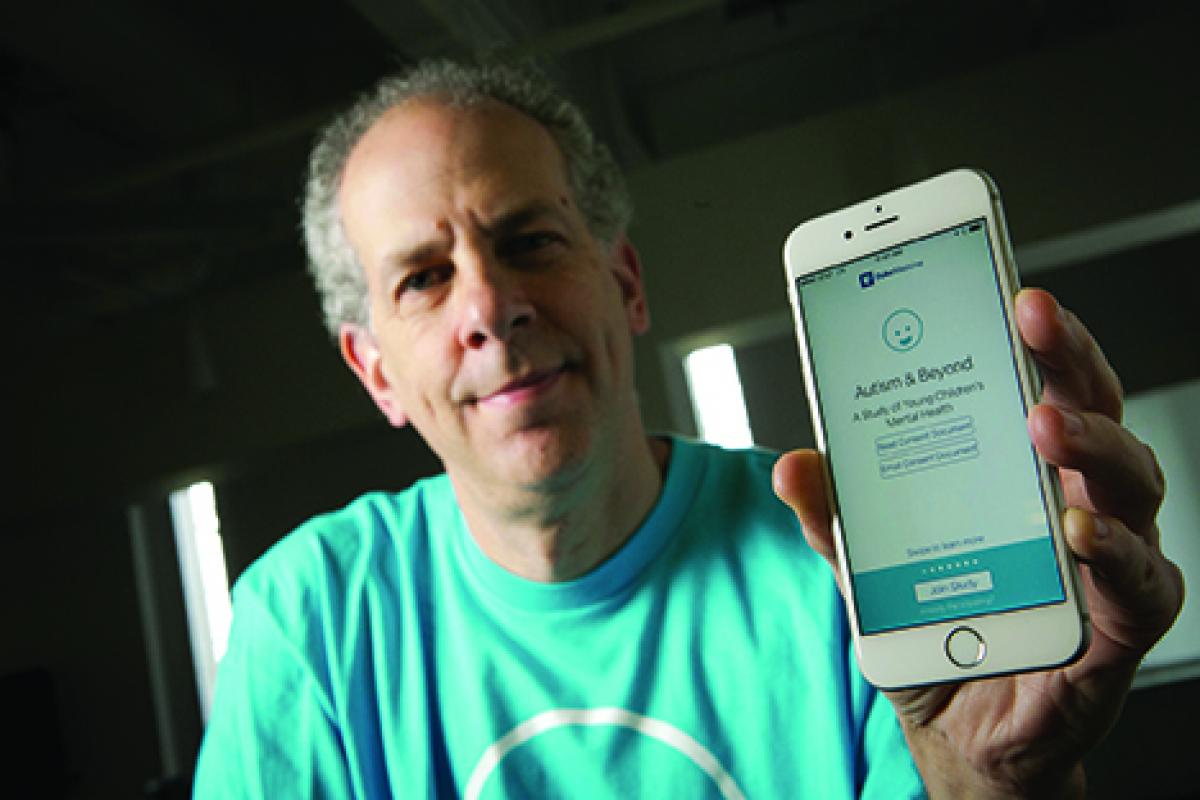 Guillermo Sapiro shows what the autism app looks like on a smart phone. 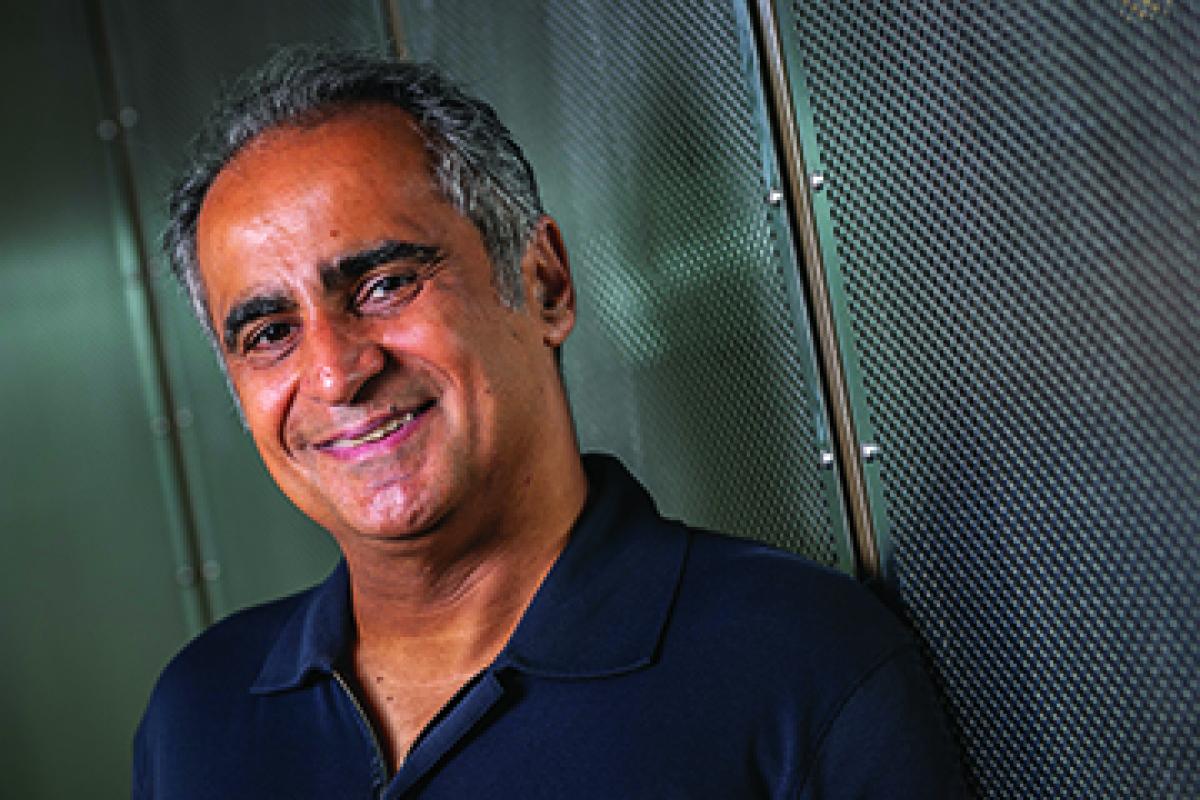 Vahid Tarokh is the Rhodes Family Professor of ECE.